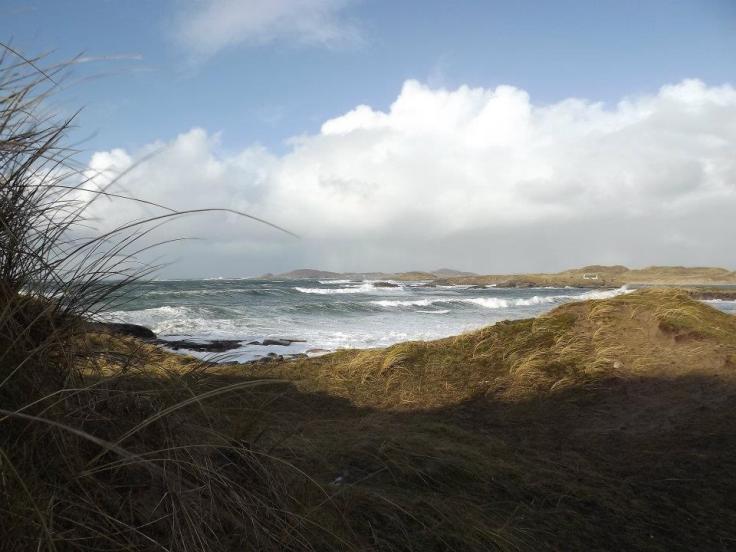 The facts that we do know about of the death of Private Con Duggan of the 3rd Battalion Royal Irish Rifles in Dublin in April 1916 gives rise to as many questions as answers. 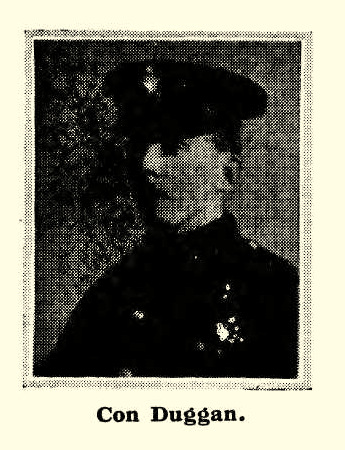 He died in the Easter Rising allegedly killed in action. He was 22 years when he died and was buried in his native parish of Kincasslagh although he is mentioned on a tombstone over a ‘grave’ at Bully’s Acre, Royal Hospital, Kilmainham, Dublin.

He was the son of Bartley Doogan from Calhame, Annagry and Brigid (Mhór) Doogan from Carrick A tSeascain in Gaoth Dobhair. He was a member of the 3rd Battalion Royal Irish Rifles of the British Army who were based that week at Portobello Barracks, (now Cathal Brugha Barracks) Rathmines, Dublin. The 3rd Battalion was in the effective control of Captain Bowen Colthurst from Mallow, County Cork as his superior officer was ill. On the Tuesday of Easter Week part of the battalion left the barracks under the command of Bowen Colthurst with the view to arresting ‘Fenians’ as Bowen Colthurst called suspects. Bowen Colthurst had with him as a hostage, with his hands tied behind his back, the pacifist Frances Sheehy Skeffington who had been arrested as a rebel sympathiser the previous day. It seems he had told the military when stopped on Portobello Bridge on his way home from trying to organise a group to stop the looting of shops that while he sympathised with the rebels aims he did not agree with their methods. Frances Sheehy Skeffington in his early thirties attracted attention from the way he dressed. He walked with a cane and generally had an eccentric appearance. He took his wife’s name Sheehy as part of his own name on their marriage. He was considered harmless but strange. He was friendly with Thomas Mc Donagh one of the signatories of the Proclamation and seemed to frequent the places Mc Donagh frequented largely to meet and often argue with Mc Donagh. This may have meant that he fell under suspicion of being a militant when he was not one.

The unit controlled by Bowen Colthurst were a motley crew made up of the 3rd Battalion recruited mainly from Ireland and East Belfast in particular but that week their numbers were increased by the presence of other British soldiers including it seems one Australian who were on holiday leave in Dublin when the fighting started. Bowen Colthurst stopped a 17 year boy who was coming from a religious service in a nearby Catholic Church. After questioning him about being in breach of curfew Captain Bowen Colthurst shot him dead. He also shot a Labour Party Councillor who was an inactive member of the Irish Volunteers and although he did not die there and then he died a fortnight later. Bowen Colthurst fire-bombed with it would seem the Australian’s help a shop of a Unionist Alderman Councillor at Kelly’s Corner confusing it with the property of a Nationalist Alderman Councillor of the same surname Kelly. He also killed the owner of the shop. He arrested two journalists, Mc Intyre and Dixon who although they were editors of Unionist publications he seemed to think they were Nationalists. They together with Frances Sheehy Skeffington were brought back to Portobello Barracks and the following morning Wednesday all three were executed by seven man firing squad. Sir Frances Vane who had overall command of Portobello Barracks was otherwise engaged that day with heavy fighting at the South Dublin Union held by Eamon Ceannt one of the signatories of the Proclamation of 1916 but he returned to the barrack on Wednesday evening to discover what had occurred.

Efforts by the highly principled Sir Frances Vane to have Captain Bowen Colthurst arrested did not find favour with the authorities in Dublin and Sir Frances Vane was forced to go to London to press the government there to arrest Captain Bowen Colthurst. This was done reluctantly although in the meantime the Defendant had been promoted by the military in Sir Frances Vane’s absence. While Vane is clearly a person of high principles the military in general seemed to feel that it would be detrimental to army morale to punish Bowen Colthurst. Bowen Colthurst was tried and convicted of the three murders at the Barracks and found guilty but insane. He was held at Broadmoor Prison Hospital for less than two years and then released on the basis that he was no longer insane. He went to Canada and lived there until his death in 1965. Sir Frances Vane was discharged from the army in 1917 and one of the reasons for his discharge was given was his involvement in the Sheehy Skeffington affair. His attempt to record what had happened was frustrated by the military censor. There was a Judges Inquiry and Bowen Colthurst did not come out to well out of the affair.  He was probably insane at least by the standards of our time although he was not lacking in calculation when it came to trying to cover his tracks. He for example searched the house of Sir Frances Sheehy Skeffington in an attempt to find evidence that the pacifist was a closet militant.

The British Army Roll of Honour has an entry for Con Duggan and it says the following; 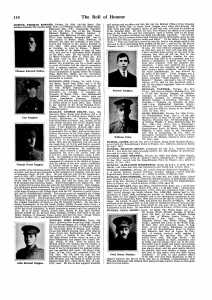 Con Duggan, Private No 5470 G Coy, 3rd Battalion Royal Irish Rifles, second son of Bartley Duggan of Calhame, Annagry, by his wife Bridget Duggan, born 22/3/1893, educated at Mullaghduff National School. Was an electric tram car driver, Lanarkshire Tramways. Enlisted 14th January 1916 and was killed during the fighting in Dublin about 30th April 1916, unmarried. Buried in the grounds of the Royal Hospital there, 2nd May. His younger brother was killed at Loos.

In other British Army records Templecrone the parish he was from was confused with Templemore in County Tipperary and the county he was from was given as Tipperary. His date of death is given as 29th April 1916 but that is not inconsistent with ‘about 30th April 1916’. He could have died from wounds received early in the week but it does seem unlikely that he would have been killed on the 29th (Saturday) or the 30th (Sunday) as the fighting was over at that stage particularly on the south side of the city.  And Con Duggan was not buried in Bullys Acre, Royal Kilmainham but in Kincasslagh, County Donegal.

The soldier who accompanied the body of Con Duggan to Annagry for burial in Kincasslagh graveyard reputedly said to Con’s mother at his wake that her son had been asked to take part in a firing squad and when he refused he was then killed himself. The soldier allegedly said Con had been a foolish boy to refuse to take part in the firings squad as all he had to do to give the impression that he was complying with the request was to take his place in the firing squad and then he could deliberately aim to miss the target. He reputedly added that he had to do that himself. Con’s mother supposedly replied that ‘that would not be Con’s way’. It may be the case that Con Duggan death was collateral damage in the Portobello Barracks murders.

I am indebted to Jimmy Duffy of Carrickfinn, Kincasslagh, County Donegal and John Mc Fadden of Calhame, Annagry who provided me with information regarding Con Duggan.